Light obscuration or Single Particle Optical Sensing (SPOS), is a high-resolution analysis technique capable of detecting a small percentage of outliers. It can also be used to obtain an overall size distribution, however, sample concentration is an important consideration when using a light obscuration particle counter. The sample must be presented in a dilute form for analysis.

Light obscuration works by passing a dilute stream of particles in a liquid suspension between a light source and a detector. In the HIAC 9703+ liquid particle counter, the light source is a laser diode, which illuminates individual particles in the stream to generate a shadow or blockage of light on the detector. This blockage is called ‘obscuration’. The detector measures the reduction in light intensity and employing a calibration curve, processes the signal to determine particle size. 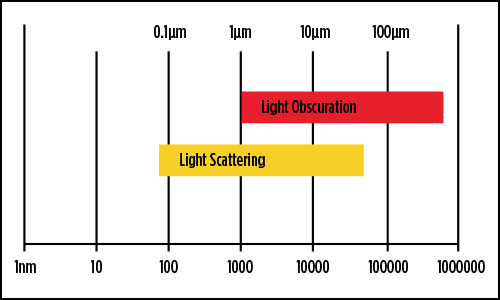 Light obscuration technique provides good results from one to several thousand microns for any kind of foreign material in a liquid.

Widely used across a variety of pharmaceutical applications, light obscuration is recognized by the ISO and USP as the primary method for measuring the size and number of particles in a variety of samples including protein-based formulations and other sterile preparations.

NOTE: HIAC 9703+ liquid particle counter is designed for a variety of pharmaceutical applications and works for both USP <787> and <788> analysis.